Thank you for purchasing our Flexs Q4!

Below we’ve outlined a few quick steps to help you get started with your new device.

Step 2. Connect the Network Jack to your computer or network

Step 3. Connect to the Flexs Q4

After receiving your Flexs Q4 we recommend you update to the latest firmware.

Upgrading the firmware on the Flexs is completely safe and even if the upgrade fails half way through due to power or network loss, your device will not be damaged, it will simply reboot into it’s firmware update mode until a firmware is successful loaded.

NOTE: In order to update the firmware the Flexs Q4 must be connected to the internet.

Click on the configuration tab and scroll to the bottom of the page, on the right corner you’ll see a button labeled ‘Update Firmware’ 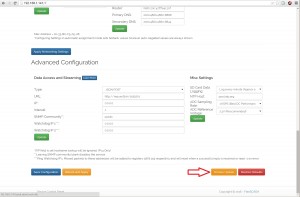 After reloading the page your device will be in Firmware Update Mode.

Click the update button to the right of the URL text box as shown in the photo, only click the button once and wait about a minute (Depends on internet speed)

LCD Not running in DFU mode

Ensure the Flexs Q4 is connected to the internet and repeat the firmware update steps carefully.

Contact us if you are unable to resolve this issue

The Flexs Q4 will automatically exit DFU mode after 1 minute if no firmware update was initiated, please repeat the steps again ensuring that you reload the page shortly after clicking the ‘Firmware Update’ button.

On some early models of the Flexs Q4 the device may use a different MAC address when in DFU mode which could result in the Flexs Q4 obtaining a different IP than expected if dhcp is used, if the Flexs Q4 goes offline after attempting to enter DFU mode consider changing the network configurations to utilize a Static IP Address, in some cases it may also be necessary to flush the arp cache on your router before entering dfu mode.

Unplug the power from the Flexs Q4
Press ‘IN’ on the encoder knob (It should click) and hold it down while plugging the power back in
Connect to the Flexs Q4 and proceed with the update normally, the device should be in DFU mode http://comcomservices.ca/firmwares/beta.bin

V8.1 (Built on May 12 2017) **Beta Firmware (Please change the update url to http://comcomservices.ca/firmwares/beta.bin before clicking update after entering DFU mode)

V4.3 (Built on Sep 9 2015) **Upgrading to this firmware will reset configuration settings, network settings will be left intact.

The Flexs Q4 features Eight universal analog inputs that can be used to connect to a wide variety of sensors.

It won’t be possible to cover every possible sensor that the Flexs Q4 can monitor but we will go over several common types. 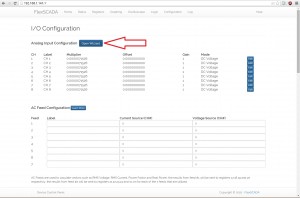 Select the ‘DC Voltage’ option from the wizards list of options. 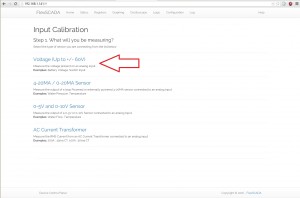 Follow the steps outlined in the wizard including removing any mode jumpers from the board. 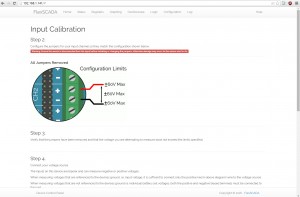 Finish following the steps outlined, step 5 allows you to configure the on-board gain amplifier to best suit the voltage of the signal you are measuring. I.E. if you are measuring a voltage that’s never going to be above 2V, you could select the highest gain setting for maximum resolution 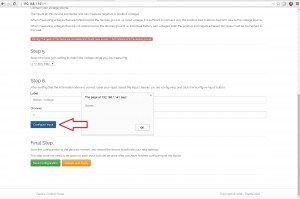 Label the input channel and select the channel you are configuring, in our case #2 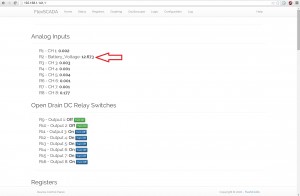 4-20ma sensors come in two types, Loop Powered and Externally Powered, Loop powered sensors are the most common and our powered through the same wires that transmit the sensor’s value (signal)

The Oscilloscope is useful for a variety of reasons

To open the oscilloscope, click on the ‘Oscilloscope’ tab and enter the analog input channel you would like to view
Clicking the sample button saves the waveform to a buffer on the device until the next sample comes in.
Clicking the Update button renders the waveform saved in the buffer to the screen 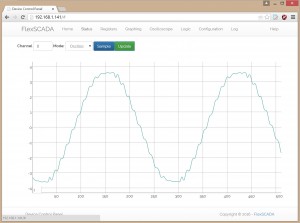 There is also an FFT mode for more detailed harmonic analysis, The FFT output is 256 points and it’s frequency can be calculated by the ADC Sampling Rate.

Each of the eight solid state DC relay switches are completely isolated and have the following specifications:

Connection polarity is specified on the board, if not followed no damage will occur however the load switch will appear to be always on if connected wrongly, always confirm operation before leaving an installation site.

Each of the solid state relays can be configured to accept a fixed state on power up and a label for easy referencing.

Each relay can be configured to accept a fixed state on powerup or continue to hold the currently latched value, an overview of the configuration tab for the relay model is shown below. A name can also be specified which allows for easy in person control from the onboard LCD display. 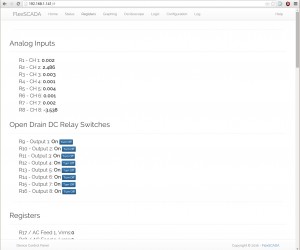 The ‘Registers’ tab allows you to view the values at each of the 128 registers.

6. Getting Sensor Data from the device

Registers can be polled via SNMP  Version 1
The SNMP community is modified on the ‘Configuration’ tab and optionally can be set blank to disable the snmp service.
Values returned via SNMP are of a string type and contain the exact register value to 4 decimal places.

To get the voltage on input channel 2 (register #2) the following command can be used.

To get the status of relay output 1 (register #9) the following command can be used.

Data can be streamed via UDP from the Flexs Q4 device when enabled on the ‘Configuration’ tab.

Data is returned in a packed struct of the following composition.

The Flexs Q4 can post sensor data to your server through an HTTP POST request.
To enable this feature select the streaming mode: ‘HTTP/JSON POST’ from the ‘Configuration’ tab / Streaming Section

Example PHP Listener script which logs the value of analog input channel 1 (register 1) to a text file on the server named log.txt

Custom web pages can be created for the Flexs Q4 by creating an index.htm file on an SD card and inserting it into the devices SD card socket
Several tags can be used to visualize the register values dynamically on your page.

Example index.htm file that shows voltage on channel 1 and allows you to toggle load switch #2
The values on this page are also updated automatically every second

Saving this script to a file called index.htm will create a ‘Home’ tab for the web interface that will load your file 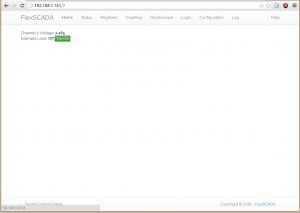 Jquery, Dygraphs and Bootstrap are available locally on the device for creating  more advanced pages.

The Flexs Q4 allows you to connect up to 16 digital ds18b20 temp sensors all sharing the same three wires.

One Wire sensors are connected to the 4 pin screw terminal opposite the network connector. 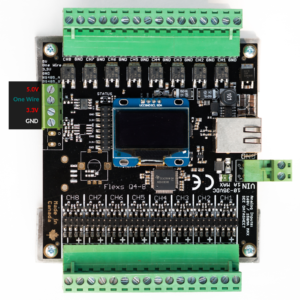 After connecting your sensors you must reboot or save/apply settings on the device so your sensors can be detected, the temperatures from each sensor will show up starting at register #49 and continuing upwards with one register for each sensor. 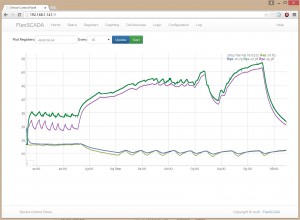 The Flexs Q4 offers several data logging modes, these modes are configurable via a dropdown on the ‘Configuration’ tab under the Misc Settings settings

The CSV file created by the data logger can be imported into Excel or similar spreadsheet programs  but keep in mind that large files may be very slow to work with so always choose the longest logging interval required for your application.

By default the Flexs Q4 will detect if it has lost it’s time and automatically sync with the NTP server specified on the ‘Configuration’ tab.

Time is lost whenever the Flexs Q4 looses power but not during a reboot, for this reason it is recommended to power the Flexs Q4 from a battery or UPS

The ADC Sampling Rate determines how many times per second the voltages on each input are updated.

When measuring slowly changing sources such as battery voltage a low sampling rate is recommended for maximum input filtering.

When measuring rapidly changing sources such as vibration sensors, ac current or ac voltage a higher sampling rate is recommended such as 4ksps to 16ksps depending on the bandwidth requirements of your application.

I.E. if you want to monitor vibration on a 3600RPM motor your sampling rate should be at least 8KSPS

This is for advanced usage only, for normal use always keep the ADC reference voltage set at 2.4V

Even with no power saving enabled the Flexs Q4 is incredibly power efficient using just under a watt however for some extremely remote installations where solar panels may be obstructed for long periods of time or where only minimal battery storage is available the Flexs Q4 has 3 options to further reduce power.

A. Click the ‘Restore Defaults’ button at the bottom right of the ‘Configuration’ tab

B. Unplug power to the Flexs Q4, Press ‘IN’ on the encoder knob (It should click), Hold down this button while re-plugging the devices power and hold it for an additional 45 seconds, the settings will be erased to defaults

The Flexs Q4 features a basic HTTP API that can be used to query the analog input values and set the relay output states.

Note to developers:  (All of the interface configuration elements are configurable through http calls as well, contact us for documentation or refer to your browsers web inspector)

The Flexs Q4 listens for setreg commands on port 8001, To remove the need for port forwarding a reply can be made to an outgoing udp stream packet from the device.

Basic Concept:
A struct is created containing the register we are attempting to set, and the value we are setting the register to, additionally  an uptime field is added to ensure that the commands can only be used within a timely manner.

Please note, to use the UDP set reg command, a password MUST be set on the device.

The Flexs Q4 features an expansion header for connecting with external peripherals. 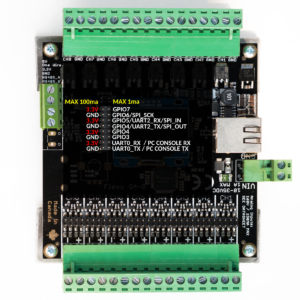 The Flexs Q4 features two independent ping watchdog counters which can be used to toggle relays after excessive loss is detected.

In this guide we will quickly go over the steps used to reboot a device connected to relay 1 after 5 consecutive missed packets.

Step 1. Scroll to the bottom of the configuration page and input the devices IP address into the ‘Watchdog IP 1’ field (Highlighted in below photo)

The specified devices ip address will be pinged according to the ‘Interval’ field which is in seconds.

Step 2. Create the logic rules which reflect the following photographs

The pinger we setup previously outputted the number of missed packets to register 118.

Note: If the ethernet link to the Q4 is physically disconnected relay 1 will always stay in the ON state.

That’s it!  You’re ready to start monitoring your devices and rebooting them automatically if they go unreachable.