Underground Vault which housed the equipment.

Due to the large elevation differences throughtout the service area, the district contains several different pressure zones maintained by pressure reducing valves enclosed in vaults buired below the city.

When adding telemetry to its vaults, the district was faced with the challenge of running the telemetry equipment without utility power; this is because the cost to bring in utility power to the vaults below the city would have ruled out the project entirely.

While traditional SCADA equipment required too much power to run off-grid, the District was able to run the Flexs Q series off-grid PLC from a small inline microturbine that operated off the pressure differential between each pressure zone.

Currently, the FlexSCADA PLC monitors and logs a number of parameters including

Total power consumption in the completed system was recorded at less than 0.7 watts!

The District serves 905 connections with pure, unchlorinated well water from 8 artesian wells and 5 deep wells from the Mckinnon and Horizon View wellfields. 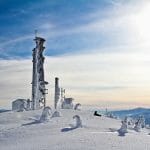 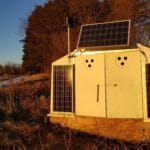